The kids did say some quotable quotes this week, but my morning with Luke yesterday trumped them all.  Before my memory fades, I wanted to write this down and share.  Memories like these should be forever documented.  They are the reason motherhood can be so deliciously sweet.

Yesterday morning was a busy one.  I took the kids to school only to realize that rain was in the forecast.  Instead of our usual “hang out” time at home with Luke and Clare, I decided to head to the grocery store while we still had clear skies.  The three of us made it to the store and back out, just in time.  We dropped Clare off at school and then I headed home to put up the groceries and perhaps squeeze in another errand or two before her school let out.

As I’m ticking off the to-do list in my head, I glance in the rearview mirror and see Luke.  Snoozing away.  We were only a mile from the house, so I was positive as soon as I unloaded the groceries he would wake up and we would be on our way.

With the groceries set neatly on the kitchen coutner, I unbuckled my still sleeping toddler, knowing the nap wouldn’t last long.

“Hmmm,” I thought, as I laid his head on my shoulder.  “Maybe I can read this quick article on my iPhone and then he’ll wake up as soon as I sit down on the couch.”

Nope, still out.  At that point, I kicked off my shoes, pushed back the pillows on the couch, settled in and patted his sweet back.  Surely, after ME getting comfortable, he would awaken.

Negative.  It was then that I realized all the groceries were still sitting on the kitchen counter, waiting to be stored away in the fridge.  And you know what I said.

Screw it.  They’ll still be there when we wake up.  The house was dark from the storms.  They had just started to roll in.  The thunder was building up steam and the rain was really coming down.  I took a deep breath and closed my eyes.  And we slept.

I think we were out about a half hour.  I never even thought to glance at the clock.  That half hour brought back some bittersweet memories.  During Luke’s NICU days, I would eat lunch and then scoop him out of his bed, sit in the rocker, lay him on my chest and we would sleep for a good two hours.  I did that every afternoon for his last 30 days in the NICU.  Somehow, during that nap, I was able to imagine life away from the cords, the specialists and the beeping and dream of normal.  We were just a mom and a son, slowing life down a little and enjoying an afternoon siesta.

Yesterday, I got to hold on to his precious childhood a little longer.  Luke is a snuggler by nature.  When he sleeps on my chest, he and I are like peas and carrots.  We just fit together.

The eggs were slightly warm, the cheese a little soft, the milk barely cold, but my heart was warm with gratitude.  Thank you, God, for trumping my plans and leading me toward yours. 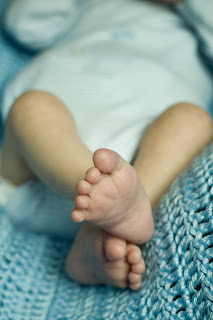