“This is like a date night!”
Scott and I during Will’s birthday sleepover.

No really.  We had so many parents tell us, “Good luck” or “suckers!” or “hang in there” when they dropped off their boys for the party.  To tell you the truth, I was pretty excited.  We shipped off the middle three to my parents and kept Luke.  That was like a spa vacation people.  All of Will’s friends were completely self-sufficient.  I didn’t have to wipe a face or hiney except mine.  Luke doesn’t really count yet!

Scott made the comment, “Wow, it’s kind of nice when you say dinner will be ready in ten minutes and no one throws a fit.” Amen brother. 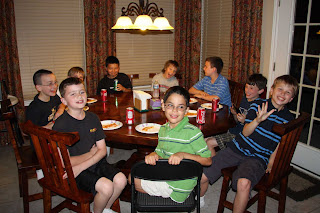 We started off the party with Saturday night Mass and then loaded up the troops and headed back to our house.  After a rush of boys, all carrying backpacks, pillows and footballs, they blazed back out the door and to the neighborhood park for some serious games of flag football and basketball.  We’re no dummies.  Tire them out as much as possible.  That definitely worked in our favor.  While they were off being “boys”, I was at home whipping up some homemade pizza, bathing Luke and putting him to bed.  When the troops arrived back home, Luke was sound asleep and slept an entire 12 hours.  Can I get a Hallelujah?! 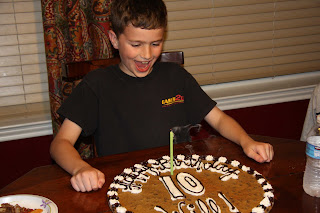 It was a blur of pizza eating, birthday boy singing, Hoosier-watching, Wii and DS playing, present opening, seriously polite talking (yes ma’am / no ma’am), popcorn munching, happy-go-lucking bunch of happiness.  We did not break up one fight.  We did not have a single bit of drama.  And they ate every single thing we put in front of them.  Scott took the night shift and had to rein in a game of whiplash (that’s what old people call PILLOW FIGHT) and settle some giggly boys around 1:30am.  Namely Giggle Master Will.  I woke up at 6am and took the morning shift, whipping up some breakfast.  Those boys were so polite and extraordinarily kind to little brother Luke.

Catholic tuition dollars hard at work, I tell ya. That, and some fantastic parents raising them. 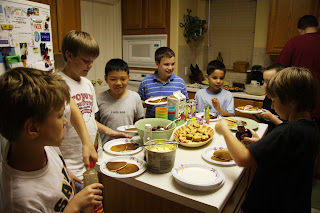 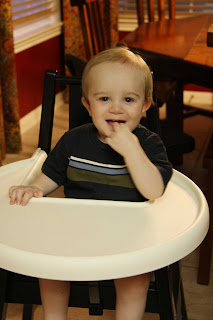 I would totally do it again.

Just give me a few months to catch up on some sleep. 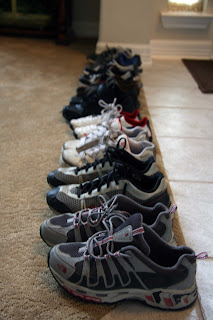