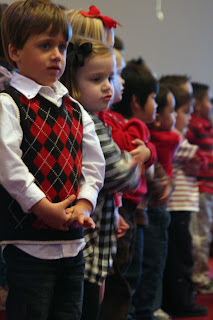 Every year, the Catholic preschool hosts a really adorable Christmas program.  I know, all preschool programs are high on the cute factor.  You’ve got Joseph tripping over the manger, nearly knocking down the scenery, the two-year-olds crying their heads off, another one picking his nose and the papparazzi of parents documenting it all on film.

I love being a mom to little people.  On this day 🙂

We dropped Clare off at her classroom and then Luke and I scouted the church for prime picture-taking seats.  Let me just say this.  When picture taking of your small children is involved, you see a different side of people.  Fortunately, this ain’t my first rodeo.  I’ve done ten preschool Christmas plays and I’ve learned a tip ‘er two.  We scored some pretty good seats, minus the fact that I forgot to factor in I was supposed to film, shoot pictures, entertain a baby and watch the play – all with two hands.  I was flying solo this morning.  Minor miscalculation. 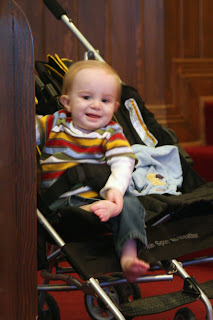 The video is mostly steady, the photos mostly in focus, the baby escaped with no permanent bruises and I saw just about every second.  As much fun as Clare was having, I was loving every moment.  I finally – after four tries – have a kid that actually sings, does the motions and loves being the star of the show.  She was so stinkin’ cute, it hurt.  I had a few moms ask me afterward if I had her enrolled in dance as much as she was moving.  HA!  I think I smiled all morning.

Clare has been practicing her songs – alot.  In Mass, walking the aisles at the grocery story, while getting dressed in the morning, on the potty.  Pretty much everywhere we’ve heard, “Mary and Joseph went to Bethlehem x3…riding on a donkey.”  Be sure to tune in tomorrow for some pretty outstanding QOTW! 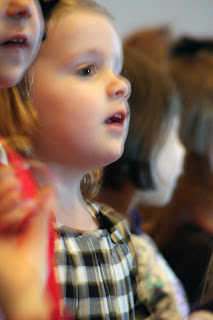 The big kids have their play next Friday.  I’ve got two angels – a speaker and a non-speaker, along with an Isaiah.  The pictures may be just as blurry, but the memories will be just as sweet.